The wage gap is no secret. Nor is it a secret that there are way more male surgeons and physicians in the medical field than females. More and more studies are emerging to confirm the presence of bias between men and women. 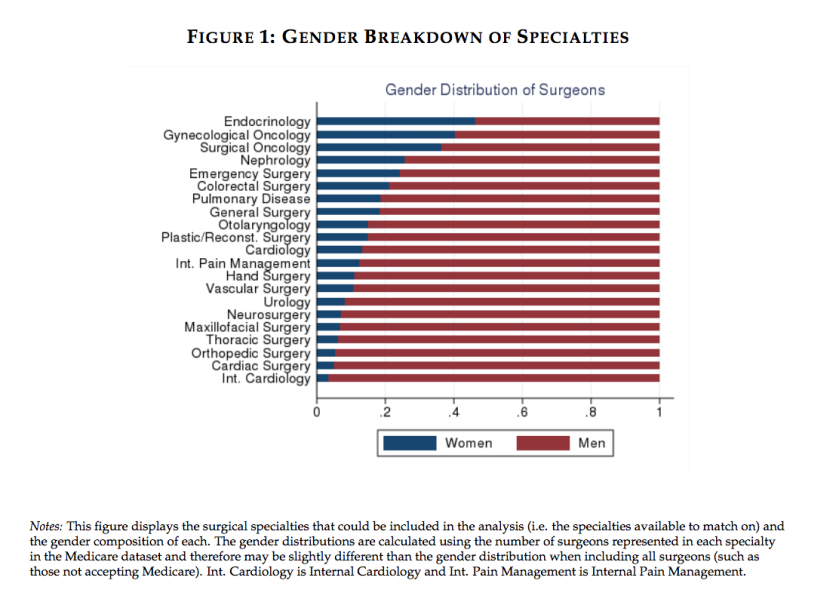 This figure from Heather Sarson’s paper illustrates the very large difference between the number of women and men employed as surgeons.

In a field dominated primarily by men, women in medicine face many more challenges than their male counterparts. According to a recent article by Vox, female doctors can make up to 27% less than their male counterparts in the same specialty. In fields such as medicine, it can be difficult to determine if this favoring is due to presence of a bias or if its due to ranking. Not only do they make less, but this article goes on to say that people are less likely to forgive a female doctor for making a mistake than a male doctor.

The research was conducted by Heather Sarsons, a Harvard student up for PhD. In her “working paper” (which I assume means it is still being revised) she designed a means to separate whether this trend was due to bias, or simply due to ranking or experience. She obtained a 20% random sample of all fee-for-service claims of all Medicare data compiled between 2008 and 2012. She then limited this data to surgical procedures, to physicians who have at least two options for referral, to surgeries performed by one surgeon, and instances where the physician has referred the surgeon in question once before. This allowed her to compare similar surgeries, each with a definitive outcome (success or failure), how surgeons performed over time (relative to success and/or failure), and how their referral ratings compared between 2008 and 2012.

Upon examining her paper, Sarsons also took numerous outside factors into account such as patient risk, time, and other “bad outcomes”. A lot of her results section went way over my head, as she created numerous, complicated statistical equations to account for these calculations. She also tested other possibilities to rule that her theory was most correct. The Vox article I read did not examine these other factors, instead they focused on the results. I cannot focus on all of them, because it would take a much longer blog post to analyze all 70 pages of her research.

***NOTE: Here is a link to her paper if you are interested in looking into the complex statistical modelling that went into this research.

Her findings were in sync with what we know regarding gender bias:

Overall, she found women lose 60% of their Medicare billings from the referring PCP per quarter when they experience a bad patient outcome, whereas men lose 30%. That’s a pretty significant difference. We would expect the number to drop, as a bad outcome in surgery is never what a PCP wants.
What is so interesting about this study is how Sarsons examined not only the statistical data, but used sociology as a lens to create other statistical scenarios that could explain this trend rather than just examining her own position. I wish I could have understand the underlying statistics better. This research, though preliminary, could lead to further investigation of the origin of bias in workplaces. It could also be a gateway to explaining why these kinds of biases continue to cycle, rather than disappear or resolves themselves.