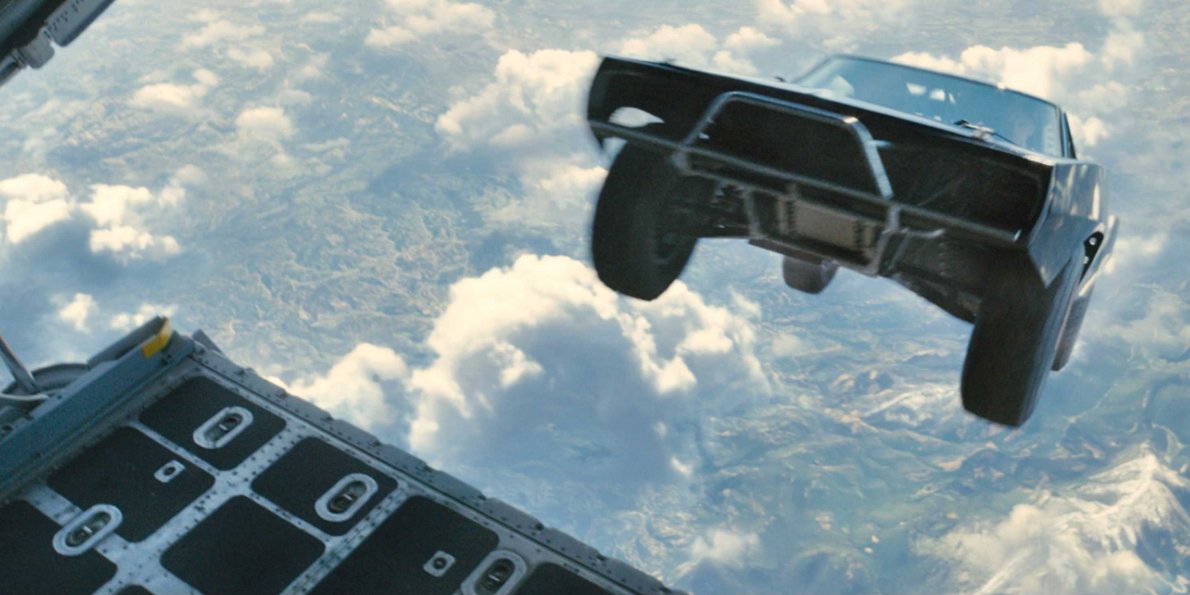 For this week’s blog post, I will be analyzing my group physics paper and the data collected in it. For a disclaimer, I would just like to say we are only in physics 1, but I will be writing about this like it was an actual published paper. In addition, this was only the rough draft of our paper, but I still think it turned out pretty well, even though in this analysis I will be tearing it apart and explaining how it doesn’t actually mean anything.

Our physics paper was about a certain scene in Furious 7, in which cars are ejected from an airplane at 12,000 feet. We believed that the cars looked like they fell for much longer than they would have in real life, so we did the calculations to see how long the car would have actually fallen, and based on how long they said it fell, how far it actually would have fallen.

The first problem with this paper is that many assumptions were made that could have compromised the end physics result the paper came to. For example, air drag had to be calculated, and we weren’t sure how to calculate the air drag if the car was spinning, so “[We] assumed that the car maintained a single orientation with the nose of the car facing down.” In the movie, the car spun a lot whilst it fell, so if we were going to do a real, accurate calculation of the car falling, a simple rectangle doing a nosedive does not suffice.

In addition to this, we took the time of falling from a trailer video, and in the middle of the cars falling, there is a picture saying when the movie was coming out. Obviously, the movie stretched out the time of how long the cars were falling, but it does not seem like they’re making the implication that the cars were falling the whole time they showed. In other words, the movie was not implying that the cars were falling in real time, and we acted like the movie was implying that. The whole paper is based off that one implication, which, when reevaluated, is not even accurate. So it’s possible that even though we calculated the car would have fallen in less time, the filmmakers were not trying to even make people think they were in the air for longer than they were.

Another issue with this paper is that it only analyzes the one scene from Furious 7. If it’s proven or disproven that this one scene is accurate, it’s impossible to make any predictions or assumptions about any other movies or even any other scenes in this movie because of it. If we wanted to actually have a good purpose, we would have analyzed more movie scenes, or more scenes of the Fast and Furious series. Unfortunately, there isn’t a huge conclusion to be made about this paper, the only possible conclusion is that the one scene wasn’t accurately portrayed. Which, that conclusion was made, but due to the air drag and the fact that it doesn’t seem like the movie is implying that the cars fell for such a period of time, doesn’t seem to be a sound conclusion.

The mathematics of how this was calculated was indeed correct. The formulas were accurate to how they should have been, but it is possible that some variables were not taken into place. Unfortunately, we had to make a lot of assumptions about things like the mass of the car, the coefficient of drag, and the air density. If any of those assumptions, that were just numbers pulled from the internet, were incorrect, the calculations would be off, thus giving us a different time of falling than it actually would have been. Due to all the assumptions, the margin of error is much greater than it would be for something with less assumptions. However, the methodology for this is very accurate. In the conclusion, the paper states  “The methodology used to figure out how long it took the car to fall and how far the car would have fallen could apply to other objects falling from the sky.”  This is correct. While figuring out the calculations for a car may have been difficult, the methodology in the paper could be used for a rectangular prism falling from a known height at a known coefficient of drag and air density, and then the falling time would have been more accurate. In that sense, this paper does a lot of good, because that is the main application of this paper.

All and all, this paper made a lot of assumptions that possible made huge problems in their calculations. The methodology was correct, however, assuming that the car didn’t spin and using numbers for the air density off the internet could have messed up the calculations. In addition, the whole paper was trying to prove that the cars would not fall for as long as they did in the movie clip, but in the clip there is a random screen in the middle advertising when the movie would come out – making it impossible to figure out how long the filmmakers are assuming the car falls for anyways. In addition to this, the paper doesn’t have a very broad reach, and it only analyzed one movie clip, making it impossible to make any assumptions about the whole movie or any other movies.

A copy of this paper can be found at https://drive.google.com/file/d/1RaQ1tR5c_B-tpp5haLbZcdrRBPT2DkyS/view?usp=sharing