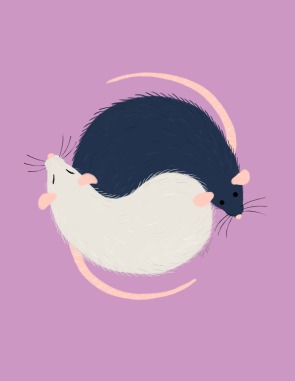 Last week I came across a Facebook post mentioning the article, “A New Model of Empathy: The Rat” by David Brown. The Facebook post and the title of the article intrigued me and I needed to investigate. Reading the Washington Post’s article I learned that being called ‘a rat’ by those who do not enjoy you, may actually be a compliment.

The article refers to a study by Inbal Ben-Ami Bartal, Jean Decety, and Peggy Mason at the University of Chicago. The purpose of the study was to see if non primate mammals have empathic concern for another. In the study, there would be a free rat and a caged rat, and in some experiments, a pile of chocolate chips. The experiments showed that not only would the free rat help release the caged rat, but that it would also save some of the chocolate to give to the caged rat once it was free.

The same study also experimented to see if the free rat would help the caged rat “if there wasn’t the payoff of a reunion with it,” i.e. if the caged rat would be released into a different area. The researchers discovered that even then, the free rat would assist the distressed rat, thus the researchers came to the conclusion that empathy was at play. Peggy Mason commented that “There is nothing in it for them except for whatever feeling they get from helping another individual.” This means that a distress call from another rat emotionally drove the free rat to help. There were even times when there was not a distress call, and the free rat would help the caged rat, even if said caged rat was actually a doll.  Further in the research we see that the rats do not even need to know each other in order for there to be this empathetic bond. Rats that are strangers to one another will even save each other.

This research gave me a lot of feelings, but the most prevalent one was hope. This research suggests, and works to prove, that empathy is not some “cultural occurrence” but rather a “biological inheritance.” If rats will help out one another, then there is hope that humans will at some point as well since it is part of our natural instinct. This research also gives me hope in the work for future animal rights. More and more research has come out proving that animals are capable of detecting emotions. With more proof that all animals have empathic behavior, real legislation can be passed to protect all creatures of the earth. This research also gave me hope that those who seem to lack empathy may be able to learn from a rat the right way to treat someone of your same “genetic tribe.” Humans need to learn a thing or two from the way rats treat each other. Except for the eating your children part, maybe humans don’t need to learn that.